The Protac seating healthcare chair envelops and calms the body. 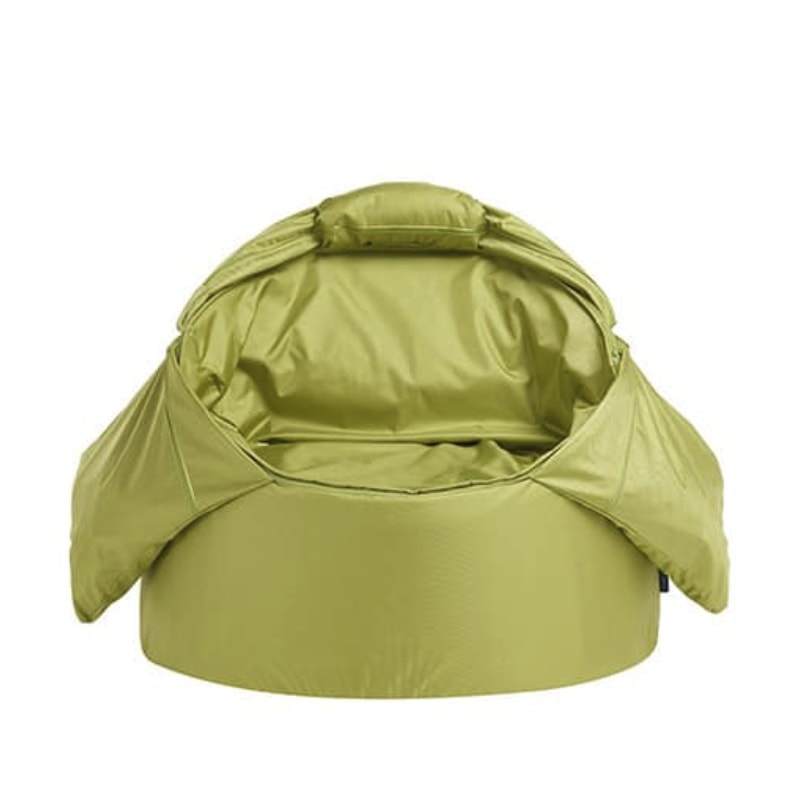 The Protac SenSit Seating healthcare solution is a very comfortable sensory-stimulating chair that provides a sense of security and calm and increased levels of concentration among users. Adults, the elderly and children suffering from mental and physical restlessness can benefit from Protac SenSit.

The chair is filled with Protac balls in the seat and back and in the special neck and side wings. These wings can be placed around the body as required, enveloping and calming the user. Also available is an optional leg rest – the Protac Sensit seating Pouffe.

It has countless applications, and can be found in care homes, hospitals, hospices, charities, special schools, psychiatric departments, waiting rooms, sensory rooms, treatment and therapy rooms as well as in people’s households.

Protac SenSit seating can be used:

Available in 8 colours. The Aqua Blue and Lime Green are ready for short term delivery, depending on the quantities involved. The other 6 colours are available, but there will be a slightly longer lead in time.

A range of medical conditions:

The Protac Sensit envelops and calms through the balls which, thanks to the deep touch pressure and constant contact to the body’s surface which they provide, activate the sense of touch and sense of body position and movement. The balls have been designed strategically into the seating solution, to maximise the user benefits. They are built into the lining of the product and the balls are held in individual specially constructed ball bags.

The Protac balls are featured in the side wings, neck wings, back cushion and seat cushion. The neck cushion is granulated. They all move in response to the user’s body position and movement. 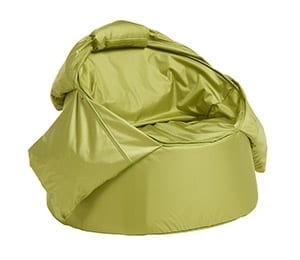 Both the side and neck wings can be placed over the user so they can feel the weight and pressure of the balls which will lead to a better sense of the body’s boundaries and body awareness, increasing sensory stimuli. These wing cushions can be adjusted for postural comfort. Alternatively, they can be positioned so that they are not on the person. 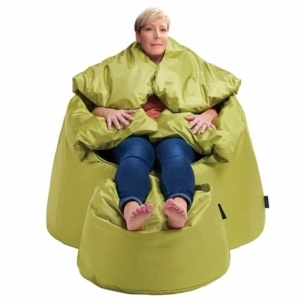 The Protac Sensit comes with carrying handles for ease of movement. 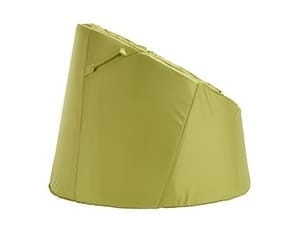 Spare Covers for ease of washing

Covers are replaceable and washable. We would recommend the purchase of a second set so that they can be used when others are being washed. The balls in the side wings are washable.

Please ensure that you follow the recommended cleaning instructions in the user manual.

In addition to the chair you have the option to purchase a pouffe footstool which can either complement the chair as a leg rest or be used separately as a footstool. The balls in the upper part of the footstool stimulate the senses, whilst being very comfortable to sit on. In some schools it is used as a chair in the lower grades. We also have other footstools that are available. 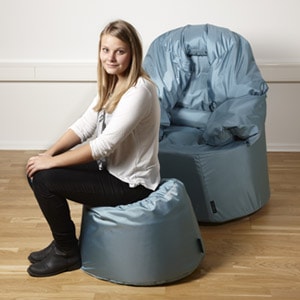 To aid your initial evaluation of Protac Sensit® we have brought together a number of case studies that demonstrate the practical applications of these products that bring CALM and PEACE to users, from youngsters to the elderly.

The Sensit is for people who’s height does not exceed 180 cm (5ft 11”). For people who exceed this height we would recommend the Sensit High Back.

The Sensit, Sensit Pouffe and Sensit High Back all come in a range of flame retardant, Oxford 100% polyester fabrics with a choice of 8 colours. Please note that some colours may have a lead time.

Important note – the covers are all washable – please ensure you follow the cleaning instructions in the user manual.

Important note - For full details of the product maintenance please refer to your user manual. 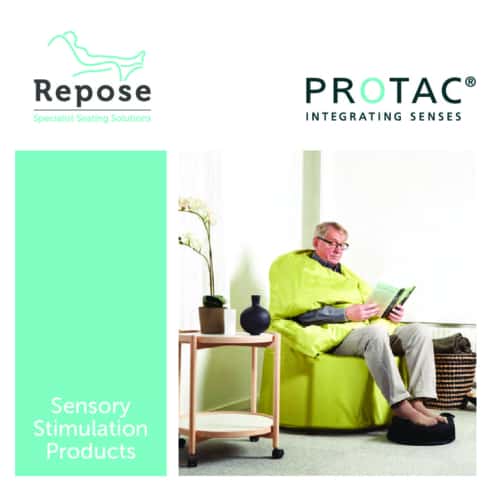 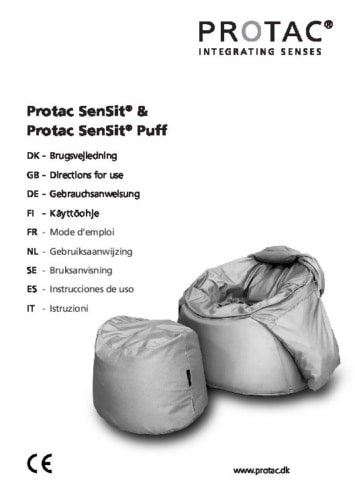 or view our online brochure.

The products are labelled according to legislation regarding medical equipment Class 1.

Normally, we say that we can see, hear, feel, smell and taste. When our body and our brain work as they should, we talk about being in full command of our senses. However, we as human beings actually have more than the above five senses.

When the contact is uniform and lasting, the brain has a sort of ‘fade-out function’, which means that the contact ceases to be registered – the sensory impression simply fades. To maintain a sense of your body, the pressure has to vary. The balls in Protac’s products act on the skin by subjecting it to a light pressure distributed across numerous points, helping the brain to register the body to a far greater extent than through uniform contact because the balls move through slight changes in position. The skin is thus continuously stimulated in new ways and ‘updates’ the brain about the body and the surrounding environment.

Simple stimulation of the skin’s tactile sense can arouse the brain, but if there is any disorder in the brain’s reception, or in how it processes sensory stimuli, skin contact can be experienced as both painful and very stressful. Distributed pressure combined with the weight of the many balls in Protac’s products provides the body with a continual update on the body’s surface, which has a very calming effect while also stimulating one’s body sense.

Another important sense is the sense of body position and movement, which is also known as the proprioceptive sense. This sense has receptor organs in the joints and muscles which send messages to the brain and calms the nervous system. Intuitively, we often use our sense of movement to create calm. If you are feeling restless, it often helps to go for a walk. If you are feeling impatient, you may fidget on the chair or tap one of your feet – which are both everyday examples that we use our sense of movement to calm ourselves down. When the weight of the balls in Protac’s products offers resistance to the body’s joints and muscles, a message is sent to the nervous system, which the brain registers as movement. This is why the balls have a calming effect

All PROTAC® products have been developed from the theory of sensory integration. Originating in the USA it was developed by Dr A. Jean Ayres, the ground-breaking occupational therapist and psychologist based in the 1970’s.

The theory is based on how the brain processes sensory impressions and how the different sensory stimuli can be influenced through weight and pressure on the tactile sense (sense of touch) in the skin and the proprioceptive sense (sense of movement) in muscles and joints. The pressure, movement and weight of the balls used in the Protac SenSit, for example, stimulate these particular senses. The Sensit chairs were developed as an aid for individuals with functional impairments.

Sensory Integration is the neurological process that organises sensation from one’s own body and the environment. It enables everyday life. 1 For most people, sensory integration develops in the course of ordinary childhood activities.

DSI and SPD are both ways to describe the difficulty some people’s nervous systems have with taking in, integrating and making use of sensory information. This changes how the person then responds to changes in their own body, the environment and how they interact with it and others around them.

SPD can influence self-regulation, movement, learning and interaction with others. 1

SPD can also interfere with skills that support performance, such as engagement and attention, as well as skills that enable the learning of new motor skills. 2

Sensory Integration sorts, orders and eventually puts all the sensory inputs together into whole brain function. 3 What emerges from this process is increasingly complex behaviour, the adaptive response and occupational engagement.

Sensory Integration is a theory based on the concept that brain maturation is the process of the unfolding of genetic coding in conjunction with the interaction of the individual with the physical and social environment. As a result of experience, there are changes in the nervous system. 4

A Process of Typical Development

Ayres, believed that sensory integration is integral to the process of healthy development when the functions of the brain are whole and balanced, body movements are highly adaptive, learning is easy and good behaviour is a natural outcome. 3

Book a Demonstration
Scroll To Top